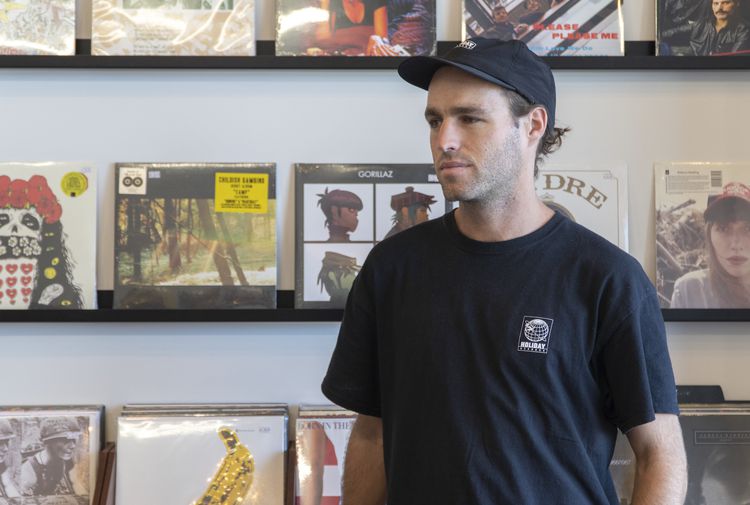 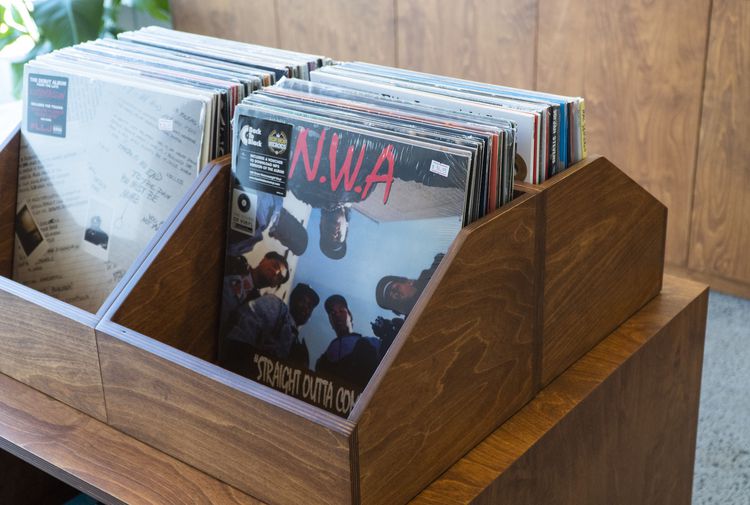 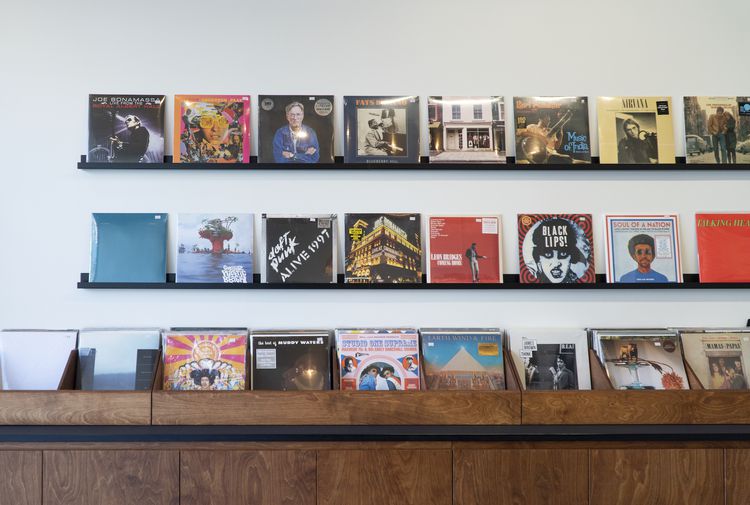 Holiday Records is breathing new life into the analogue music scene with their stunning retail space in Auckland’s CBD.

Brought to you by Counter Journal, NZ’s newest independent magazine featuring the most interesting stories you never knew you wanted to read. Find out more at counterjournal.co.nz.

Visit Holiday Records in Auckland's CBD and you will be greeted by an array of vinyl records so nostalgic you’ll be hunting through your back pocket for Knucklebones and Spaceman Candy Sticks.

There’s always a dope record playing in the shop chosen by either Joel or Ben, the two owners who run the store, plus a selection of turntables and Holiday Records merch to keep your eyes and ears busy. But the real drawcard is the Viryl Technologies WarmTone record press in the back room. Rather than hiding this beautiful piece of machinery behind closed doors, the guys installed a viewing window that looks through to the press room, allowing visitors a first-hand look at the process of pressing and finishing vinyl.

In fact, these records are the first to be produced in Aotearoa since EMI closed its doors in 1987, meaning local musicians can once again have their albums produced locally on vinyl without the high cost and lead times of overseas pressing plants. As Joel and Ben put it, “we hope to further inspire the vinyl record resurgence in New Zealand”, and it seems they are well on their way to achieving that goal.

Ben has been the musical force driving Holiday Records. After a time as a DJ whilst studying in Dunedin, he’s since retired his decks in preference of a guitar as a member of local band, The Rambling. Joel has a varied background including working as a criminal defence lawyer prior to Holiday Records. While not in any bands himself, he tells us, “I have a deep interest in music and the culture surrounding it, so I feel privileged to co-run a business that incorporates passion and purpose.”

Here’s what they had to say about starting a business together and what drew them to the industry in the first place.

How do you guys know each other?
Joel: Ben and I met at the University of Otago during our studies. Since then we have (among other things) lived and worked in New York, gone to countless gigs and built Holiday Records together.

How did you get into the record industry?
Joel: The idea to open up a vinyl record pressing plant started as just that, an idea. We have always been fans of vinyl, but it wasn’t until Ben tried to get vinyl pressed for his own band that he realised it was not possible in NZ and the turnaround times for offshore plants were huge due to the ever-growing demand for vinyl worldwide.

Since then, we undertook a lot of research into the viability of resurrecting the industry in New Zealand, including a couple of trips around North America visiting pressing plants, suppliers and most importantly, training on the machine that we now have at Holiday Records. We found that vinyl demand was growing worldwide and there was a glaring gap in the New Zealand (and Australisian) market. So here we are.

What is it about vinyl that you love?
Joel: For me, it is not only about the distinct sound that vinyl famously provides (crackles, pops and all); it’s about the experience and the added engagement with music that putting a record on provides. It is far more than pressing play on Spotify and plugging your earbuds in. It is about being truly present, slowing down and listening to an album as it was intended—from start to finish—and holding the artwork and admiring the artistry that is involved in producing any record.

Why press your own records in-house?
Joel: We basically wanted to make pressing vinyl more accessible for New Zealand artists, bands and labels. This not only means making it affordable (by removing international shipping costs), but also transforming a typically confusing process to one simple and straightforward job that can finally be done on home soil again. Before Holiday Records, artists would need to liaise with multiple overseas parties (brokers, pressing plants, lacquer cutters etc) to get a run of records pressed and shipped to New Zealand. We are also dedicated to producing only the highest quality vinyl records, so taking control of the manufacturing process ensures this.

What kind of music do you listen to at home?
Joel: Ben and I share a similar taste in music—some of our favourite genres are folk, blues, punk, indie-rock and alternative rock. Jack White has always been a hero for us and was part of the inspiration to open a pressing plant for ourselves (Jack White is a pioneer of the modern record resurgence and has his own plant, Third Man Pressing in Detroit, MI). Genres aside, we both appreciate all forms of music and the hard work that goes behind producing every single song. We can be found listening to a variety of records at home, so like our collection in store we are not bound by any particular genre or era with what music we enjoy.

What advantages does vinyl offer that Spotify can’t?
Joel: Records are fragile and require a little care to ensure they don’t get damaged—but that is also part of the beauty of them—they are precious, valuable and meaningful. It says a lot more if someone has gone through the process of buying and looking after a record as opposed to saving that same album on Spotify.

Although there is undoubtedly a place for digital music, there is as much a corresponding (and arguably more important) place for physical music in one’s life as well. While digital music is convenient, it has made music more fast-paced and consequently, disposable. I feel it has taken away so much of the accompanying tangible and artistic qualities that are synonymous with music. Plus, you can’t necessarily pass down your playlist to your children. Your record collection on the other hand...

Do you sell new records only or second hand too?
Joel: Currently we are only selling new records, with plans to expand into the second hand market. We appreciate the demand and admiration of second hand records is massive in the vinyl community, so we only want to foster that even more.

You’re bringing pressing back to NZ for the first time since the 80’s. Why do you think it has taken so long, and why hasn’t anyone else done it?
Joel: I think it is for a number of reasons, I believe it hasn’t been until the past few years that a solid and reliable resurgence has been established (although vinyl sales have been on a consistent rise for over a decade) in New Zealand that warranted our own vinyl pressing plant in New Zealand. It has also only recently occurred that a viable option for a new press machine has reached the market—Viryl Technologies’ ‘WarmTone’ machine. It is the first automated and fully modernised record press in over 30 years and it’s everything that its vintage counterpart is not: safe, fast, reliable and more environmentally friendly—basically it has removed the rust from the vinyl manufacturing process.

Prior to this, one would have to realistically track down an old machine, refurbish it and hope like hell that it would work (and continue to work into the future)—this time, money and risk didn’t seem worth it. We feel the stars aligned, with the ever-expanding demand and new technology available to open up a pressing plant in New Zealand. It is by no means an easy operation to launch, but we feel it is worth the sweat and tears to bring a country with such a rich and vibrant music community its very own pressing capabilities.

How would you explain the workings of a vinyl record to a 15 year old?
Joel: Without getting too technical—a vinyl record is made from PVC (polyvinyl chloride) which is imprinted on each side with one unbroken microscopic groove that loops from the outside in toward the centre.

Records are played by placing the needle of a turntable on the very outside groove (the lead-in), and as the turntable spins the needle slowly works its way inward, tracking along this intricate groove as it converts the sound vibrations from these tracks into an electrical signal that is amplified through speakers, thus creating music. Once you get to the end of one side, you can flip it and listen to the other half of the album. A 12” vinyl record can hold a maximum of 25 minutes of music each side. 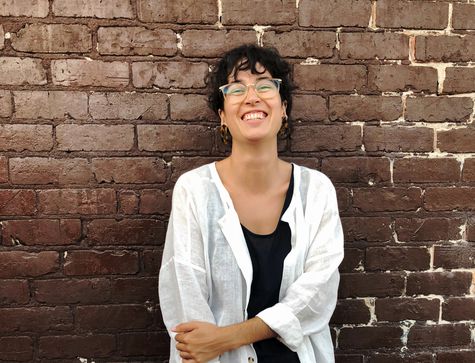 We chat to designer and maker Keva Rands about the why, the what and the who of her company, Papa Clothing. 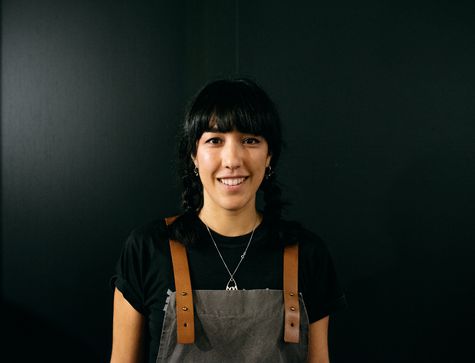 Got queries on how bread can be wholesome and healthy? Well, it would be best to direct your questions to Yeshe Dawa, AKA The Midnight Baker.