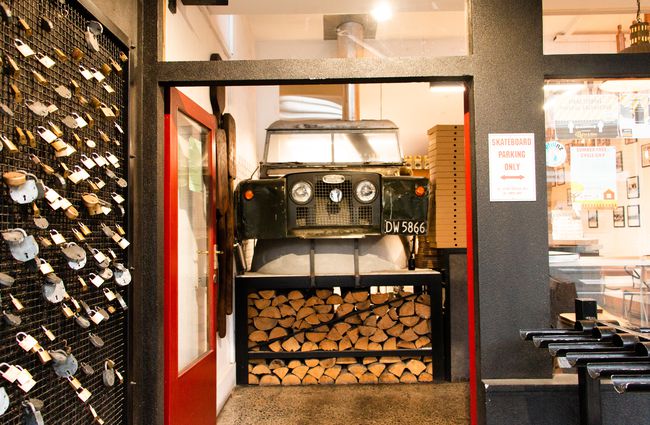 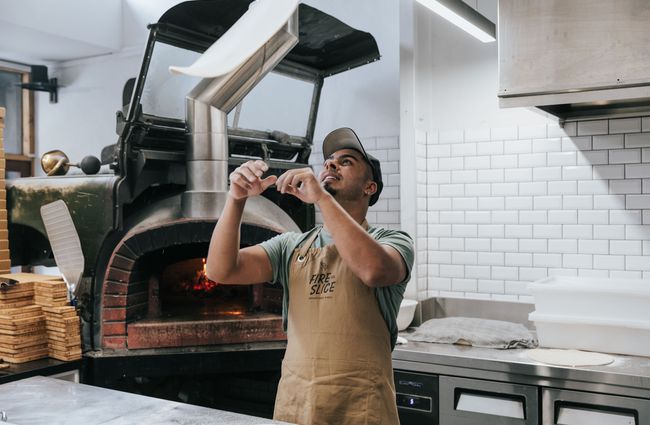 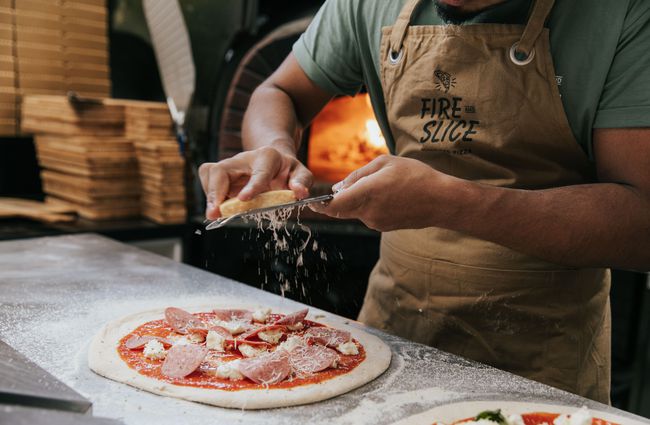 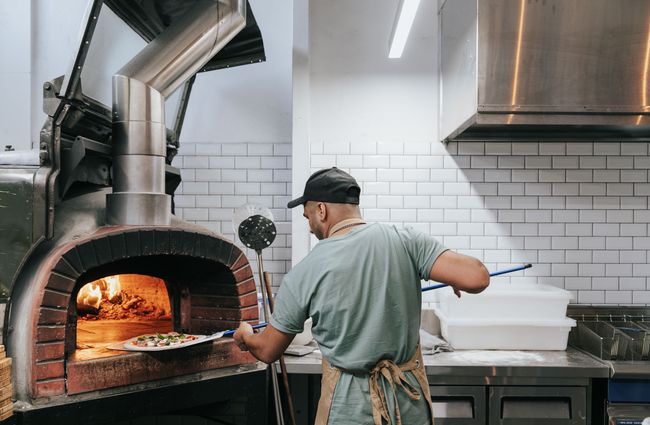 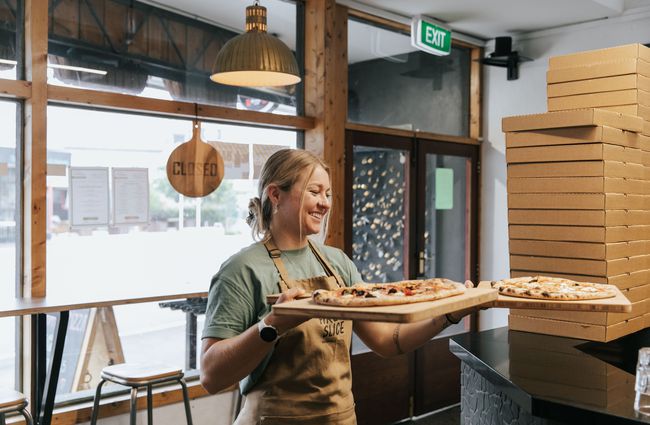 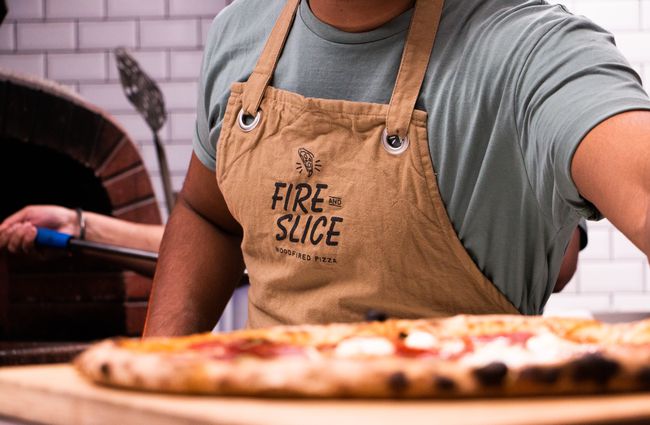 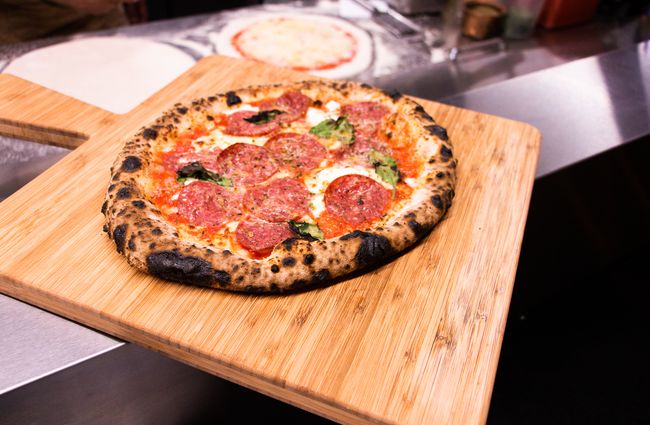 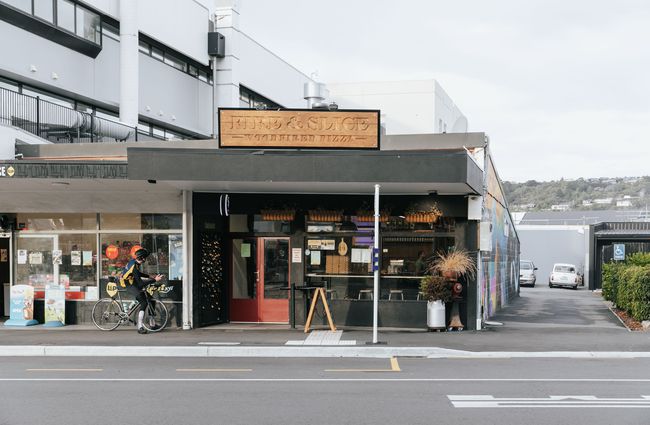 Most great things are built from the ground (or base) up, just like pizza. Woodfired pizza shop, Fire and Slice, located in Sumner village is no different.

Owner/operator Pal Singh made his first pizza at 16, went on to hospitality school, trained at a 5 star hotel and eventually moved from Auckland to Sumner. Once he’d arrived in the quaint seaside town he realised the only thing it lacked was good pizza. After learning that Sumner’s long standing, local pizza joints didn’t return after the earthquakes he decided to open one.

When you first step into Fire and Slice you’ll notice an antique 1965 Land Rover Series two hood, the brick pizza oven, rolling pins hanging from the ceiling, a surfboard fence and heaps of All Blacks  memorabilia. The fit out is fun and welcoming and, in Pal’s eyes, an achievement in and of itself. In 2017, Pal heard the shop’s former tenant was leaving and he saw an opportunity. He drew up some plans, approached the landlord and got to work securing all of the council permissions he would need to make his pizza shop a reality. The difficult process took fourteen months but gave Pal plenty of time to perfect his craft. After just one visit, you’ll see that his research and hard work has truly paid off.

At Fire and Slice you’ll find a mix of traditional Italian pizzas, American style pies, classic Kiwi ingredients, Middle Eastern-inspired toppings, vegan pizzas and more. Every pizza is made with care from start to finish. Pal and his team make all the dough from scratch and stretch and spin each base in their open kitchen.

Next, the pizza experts apply a colourful array of quality toppings. All the veggies and other accoutrements are chopped, sliced and diced by hand in house and nearly every ingredient is sourced within New Zealand. From there each pizza is carefully baked in the 400 degree, brick oven. Grab a seat at the bar to watch it all happen.

One of the most popular pizzas ‘Bianca di Buffala’ features tomato sauce and hand stretched Wairiri buffalo mozzarella. Brushed with oregano and Turkish olive oil before baking, this pizza is completed with fresh basil leaves and cracked pepper before it’s served. The ‘Fig Fused Venison’ pizza comes with tomato sauce, Tai Tapu venison and Wairiri buffalo mozzarella. Another option,  the ‘Salmone’,  features creme fraiche, capers, smoked salmon, red onions and mozzarella - the shop uses over 7-10  kg of this locally made cheese each week.

The menu also offers not one, but five vegan pizzas. Rather than using imitation meats, they stick to delicious, wholesome toppings and the result is perfectly balanced - plenty of non-vegans order these pies, too. The most popular ‘Green Pointer’ is constructed with vegan pesto, vegan cream cheese, charred mushrooms, cherry tomatoes and almonds.

To complete your wood fired meal have a look at the chalkboard which lists all of the Italian whites and Italian reds on offer alongside craft brews from Panhead.

Fire and Slice is, simply put, a great spot for a slice by the beach. So come one, come many whether it be on a date, after a surf or on your lunch break and treat yourself to a whole pie and a drink or a quick slice to go.

Near Fire and Slice Woodfired Pizza 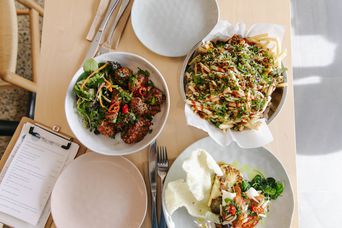 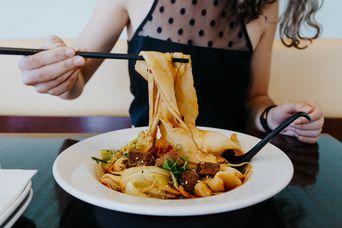 Miss Peppercorn is a modern eatery, celebrating the fragrant and mouth-numbing flavours of the owner's hometown in the Chinese province of Sichuan. 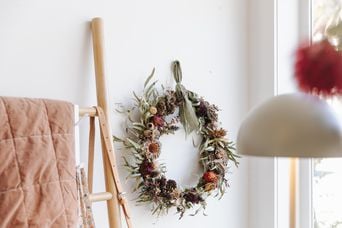 This one-of-a-kind floral shop by the seashore is the product of her creativity and appreciation for native foliage, Sumner and the greater Christchurch community. 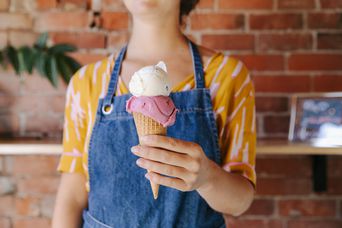 It’s a bold move naming your business after the ultimate paradise, but it couldn’t be a more accurate description of this beach side nirvana. 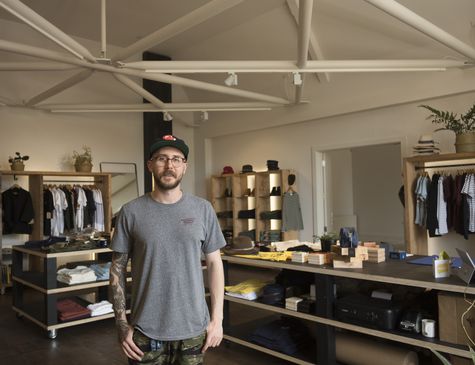 Step inside the historic Boys’ High building in central Christchurch and you’ll find your way upstairs to Indigo & Provisions, a stunning retail space. Focussed on quality, the space has a great brand story for the curated fashion and homeware items that adorn the shelves. We caught up with owner/operator Dominic Ellett to hear more about the brand, his ethos, and his inspiration for the store. 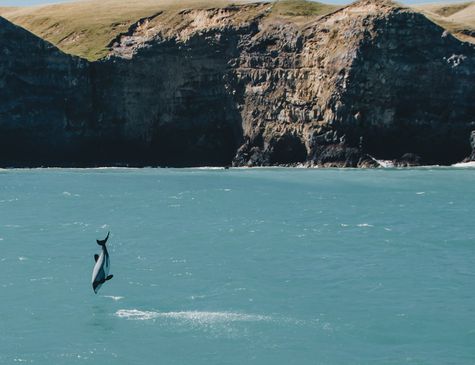 Located just an hour and a half’s drive from Christchurch, Akaroa and Little River are the ideal spots for a day trip or an overnight stay.