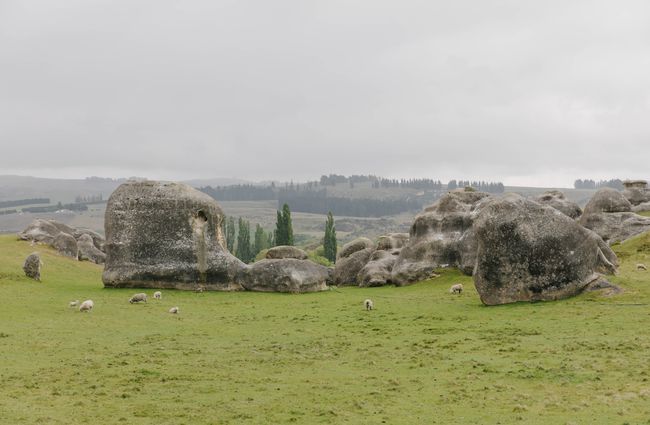 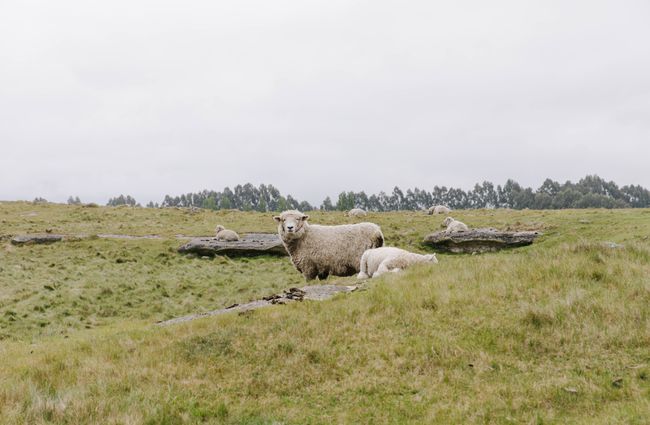 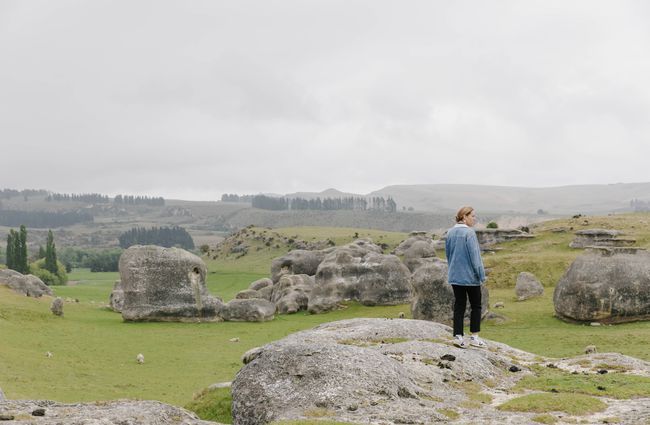 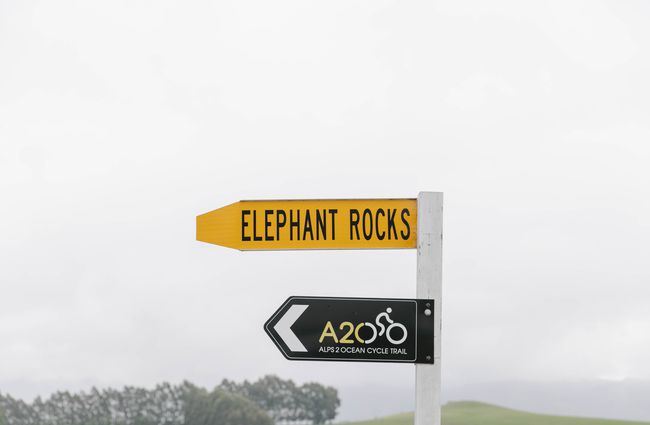 Elephant Rocks lies within the Waitaki Whitestone Geopark, an area that covers the whole of the Waitaki District. The geopark tells the story of the land and how it has shaped the lives of its people. At the heart of it all are spectacular limestone outcrops, like Elephant Rocks, which showcase a time when most of New Zealand was under the sea.

To experience this part of the geopark for yourself, pop ‘Island Cliff 9494’ into your GPS and head away to Elephant Rocks. These unique formations sit on private land. Slow down on approach, as it’s easy to miss the wee carpark. The Alps 2 Ocean Cycle Trail® also runs right past so be sure to plan a stop. Once you’ve found it, do the quick 200m walk and find yourself peering down into a limestone basin which is home to a herd of Elephant shaped outcrops. Mind the sheep (not made of stone) and head on down to explore.

Nature lovers and amateur geologists will be impressed to learn that this Otekaike Limestone began forming about 26 million years ago. At that time, the Waitaki region was a seabed teeming with marine life. The limestone is made of compacted shell fragments from the creatures that lived and died at that time. The limestone has since been uplifted and has been eroded into the shapes we see today. As you wander through the outcrops keep a sharp eye out for evidence of an ancient sea floor, and the ways in which wind and rain have given form to strange and interesting ‘elephant’ shapes. If you’re a climber bring your bouldering gear, too.

Limestone in the geopark varies in age, and it’s the older Ototara limestone (approx. 35 million years old) that makes Ōamaru’s architecture so iconic. The creamy white stone can be seen in many of the region’s older and iconic buildings. The Waitaki Whitestone Geopark hopes to become New Zealand’s first UNESCO Global Geopark. 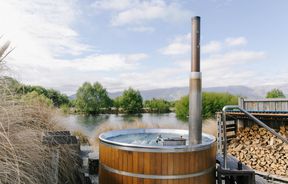 Weary travellers mustn't miss Hot Tubs Omarama place, where you can soak in a cedar tub in the stunning North Otago landscape. Tubs fit up to eight people and are filled with fresh mountain water for each booking. 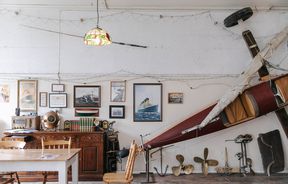 Local Kevin Murdoch restored The Terraces building and filled it with historical relics and an art studio. Pop in for a chat with Kevin and the other Ōamaru artist in residence, Al Bell - this is something of an alternative visitors’ centre. 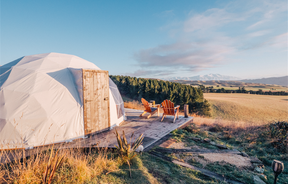 Glamping with sweeping views of the Waitaki Valley, and hosts who know its every nook and cranny including the best summer swimming holes. Honeymoon, stay-cation, reunion, whatever the occasion, it’ll be best had here. 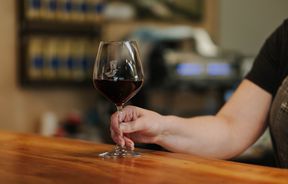 River-T Estate vineyard and tasting room has the ‘largest selection of Waitaki wine in the world’. Sit inside or amongst the rows, sip a glass and get stuck into any of their locally sourced platters. 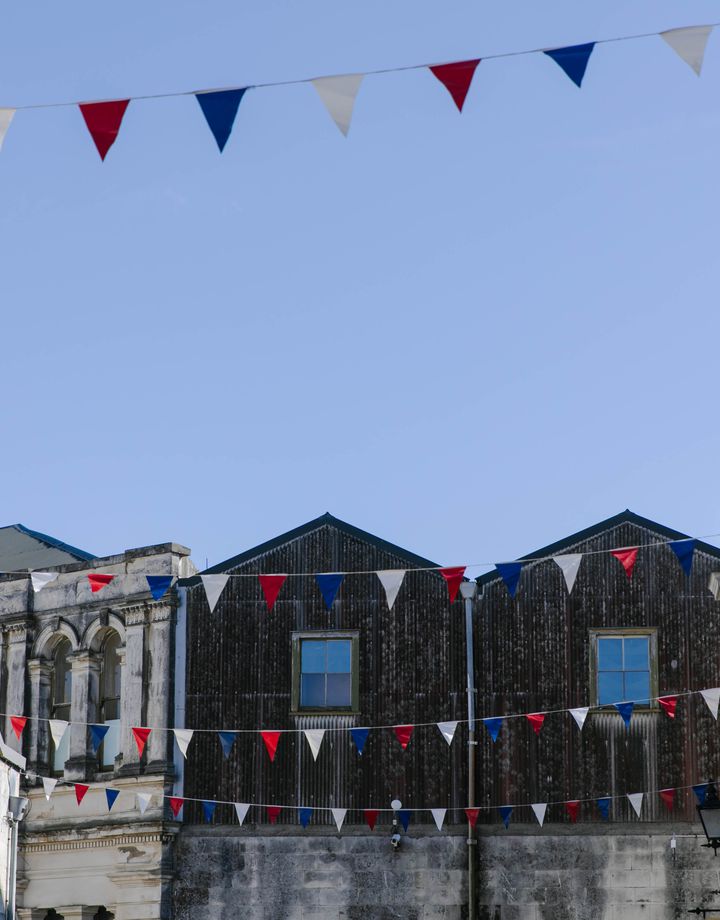 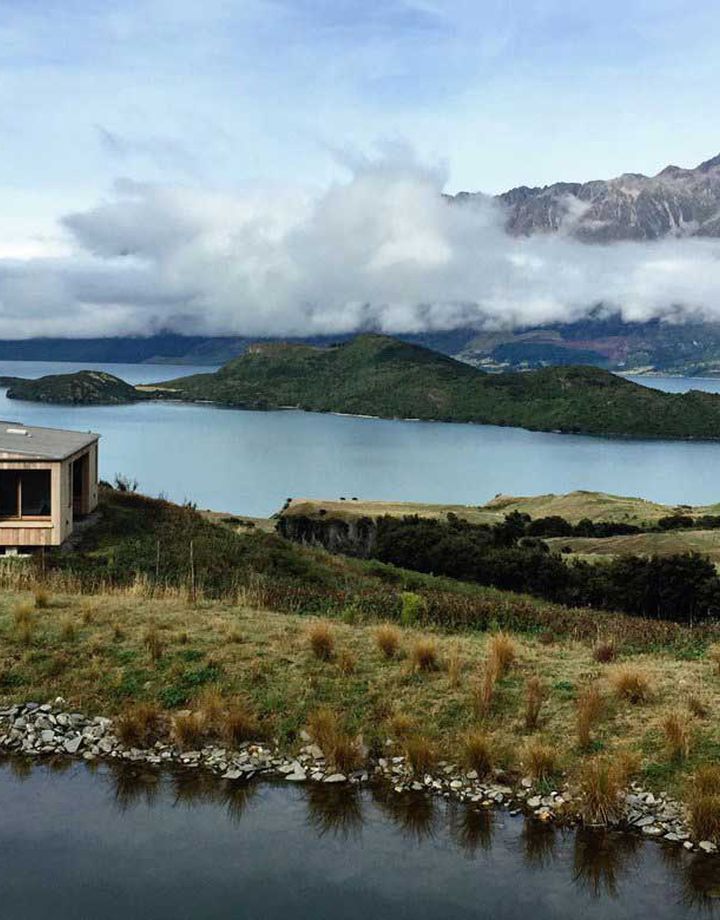 Story Ōamaru & Waitaki
Banish busyness in favour of an escape that will nourish your mind, body and soul.